The physical method of pruning is as important as knowing what limbs, branches and stems to prune. Incorrect pruning.

Proper pruning techniques allow for the cutting of a branch or limb and at the same time avoiding any damage to the tissue.

As shown in Figure 21, to prune a limb, stem or branch that is alive locate the branch collar. The collar comes out from the limb tissue beneath the base of the branch to be removed. 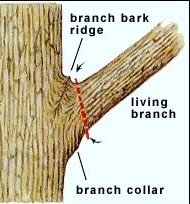 On the top surface of the branch there is a ridge of bark that is at the same angle as the branch itself. The red dotted line shows where the pruning should take place. By pruning in this area you will not damage the most important parts of the joint, namely the branch bark ridge and the branch collar.

As shown in Figure 21, the pruning cut should commence on the far side of the tree limb and angle down, away from the limb of the tree, avoiding cutting or damaging the branch collar in any manner.

The pruning should be as close to the main limb as possible without touching the branch bark ridge. This will allow the cut area to heal quickly and efficiently.

If you cut the branch to far from the main limb, you will end up with a branch stub (Figure 22) and will end up with a poor or no formation of woundwood, the remaining stub will die and woundwood will most likely form at the bottom of the stub. Woundwood, that is not formed properly prevents the cut from healing quickly which can allow for decay.

You will not know if you have made a correct pruning cut for at least one growing season. If after one growing season you have a concentric ring of woundwood around the cut, as shown in Figure 4, the pruned cut was made correctly. If however, you only have woundwood on the sides of the cut then the pruning was not done correctly, as shown in Figure 23.

Small branches or stems may be pruned using hand pruners. The key is to always use sharp tools, that are of the correct size, that will cut through the branch or stem without tearing the bark.

Larger tree limbs should be cut using a saw, rather than a hand pruner. To ensure that the limb is cut cleanly support the end of the limb with one hand while cutting the limb free from the tree, as shown in.

Larger limbs, that cannot be easily supported, should be pruned, by making sure that the weight of the limb is removed from the limb being removed. This is accomplished by making three cuts in the limb as shown in Figure 24. 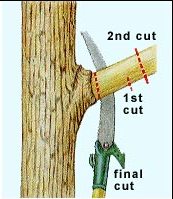 Dead limbs, stems and branches should be removed as was detailed in the section for removing live limbs. As shown in Figure 25, it is easier to identify the branch collar and branch ridge bark on a dead limb, stem or branch that it is on a live limb as they do not stop their growing cycle. 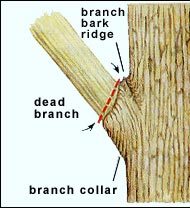 Figure 25 - Pruning a dead branch or lime from a tree

Dead limbs that are large should still be supported and if there is any possibility that bark could tear when the limb is cut you should use the three step process outlined for live limbs.