The cause can be due to stringers and/or stair treads that have warped, twisted and/or bowed. Stringers and treads that have shrunk as they have dried out and it can be caused by the continuous weight being applied to the treads which will create a small springing action to the treads, which in turn will apply an upward pressure on screws and nails.

Squeaks can also be a result of poorly constructed staircases. As an example, construction adhesive was not applied to the treads, risers and stringers prior to screwing them into position. Nails were used instead of screws to fasten treads and risers to the stringers. Screws have dramatically more holding and staying power than nails do. Stringers may not have been properly fastened to upper floors using either "hanger boards" or a "ledger" and/or they may not be attached securely to the lower floor using a kickboard.

In many cases identifying the cause of the squeak or squeaks is a bigger challenge than fixing them.

If you have access to the area on the underside of the staircase there is some investigation to perform before attempting any fix.

The most convenient method is to install metal angle brackets where the stringers and the floor joist header meet, as shown in Figure 1. Use two brackets, one on each side of the header. Offset the brackets so that the screws do not hit each other inside the stringer. Use screws and not nails to secure the brackets.

You can also screw the risers to the treads. Be careful not to spit the tread or the riser - always drill a pilot hole. If the riser is 3/4 inch thick material a #8 1 3/4 inch wood screw with a countersunk head should do the job. If the gap between the stair tread and riser is wide enough try to insert some carpenter's glue into the crack before screwing the boards together.

You may actually find that you already have triangular blocks in place, however over time these can become loose and need to be replaced. Remove the loose block and scrape off the dried glue from the block, tread and riser. Re-install the block about a 1/2 inch from its original position, so that you are not utilizing the old screw holes.

If at all possible allow a few hours for the adhesive to cure before walking on the steps.

Use two pieces of 2 inch angle iron approximately 18 inches long, as shown in Figure 3, (do not try to repair a stringer using metal for shelf racking or other bent metal that is not "angle iron"). Drill four - 1/2 inch holes in the angle iron and corresponding holes in the stringer. Keep the holes at least 3 inches back from the split. Bolt the two pieces of angle iron to the sides of the stringer using 1/2 inch hex bolts, secure the bolts as tight as possible. Remove any shoring lumber that you may have put in place as temporary stringer support. 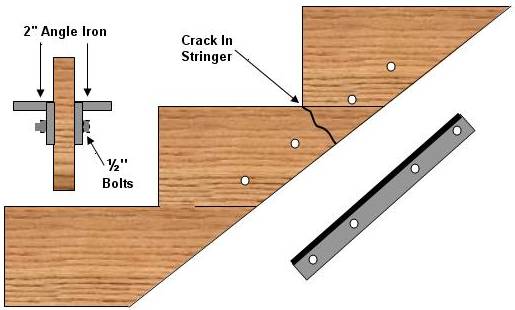