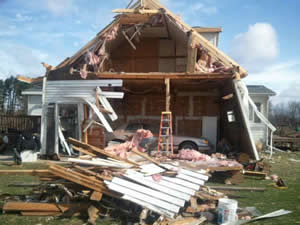 The number and severity of tornadoes and hurricanes appear to be on the increase in North America and although we seem to go through cycles the high end number seems to continually increase.

Some scientists attribute the increases in the number and severity of tornadoes to global climate change while others believe that tornado appearance is a cyclical event.

You can protect your family from the devastation caused by tornadoes by building a safe room or storm shelter either in or near your home. Safe rooms and storm shelters have proven that they can and will save lives and prevent injury.

There are basically two types of safe rooms or storm shelters:

Why do storm shelters or safe rooms protect you and your family?

The primary danger from storms such as hurricanes and tornadoes are the winds that accompany them. The wind itself can be very destructive; removing roofs, and felling trees. However, the biggest danger comes from flying debris. Tests have shown that debris in a tornado or hurricane can penetrate exterior walls and windows. The debris acts like an old style cannon ball, or missile destroying everything in its path. Normal construction methods are not sufficient to save a house from the direct hit of a tornado.

While the experts have long told people that they should head for a closet, stairway or hallway when a tornado or hurricane appears, they are far from safe havens and will only protect you from flying glass. A house that collapses, fully or partially will destroy a closet, stairway or hallway. Basements were often touted as a safe haven from hurricanes and tornadoes and again being in a basement is a probably a better alternative than being on the top floor of your home. However, many individuals have been badly hurt or killed when their homes have totally collapsed and filled the basement with debris.

The only true method of protecting your family is with a room that has been specifically designed to protect your family against the devastation caused tornadoes and hurricanes. 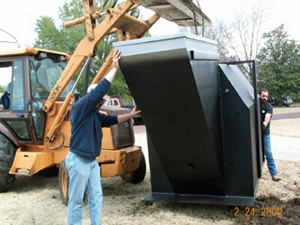 Up until a few years ago the only real protection available from hurricanes and tornadoes was the "storm cellar". A storm cellar was a room dug into the ground with walls made of concrete block or reinforced concrete. The door was at a slight angle and there would be steps leading down into the shelter. The major problem with older shelters was the door. Because the door had to be above ground in order to access the shelter, high winds had a tendency to blow the door off the shelter and in turn exposing those that were in the shelter.

Most modern storm cellars are pre-fabricated bunkers made from steel, as shown in Figure 2, fiberglass, as shown in Figure 3, or polyethylene, as shown in Figure 4, material. Rather than being constructed on site they are delivered to site as a complete unit and dropped into a hole in the ground. The unit is then covered with earth, except for the entry door which has been bolstered to make it stand up and remain closed during the most violent of winds. 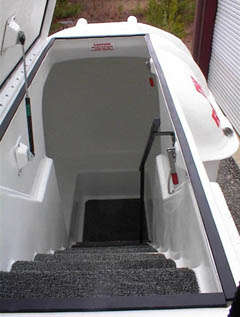 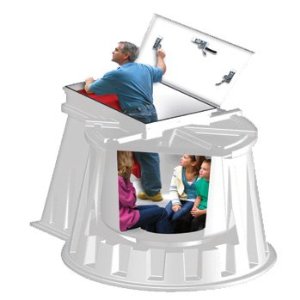 There are three major negatives to an outdoor storm cellar.

A safe room shelter overcomes the problems associated with the issues of being able to access the shelter in time; access to the shelter by those individuals that have mobility issues and the issues of installation stability and flooding.

The safe room is built as part of the home and is accessed inside the home. It is generally made of reinforced steel or concrete and is designed to make it impervious to the devastation caused by tornadoes and hurricanes. The house can collapse around and on top of the safe room and there will be no damage to the structure, hence the occupants are safe within its walls.

Safe room shelters can usually be utilized as closets or storage areas; although the owner of a safe room must ensure that the room is not filled to the point where people cannot occupy it. 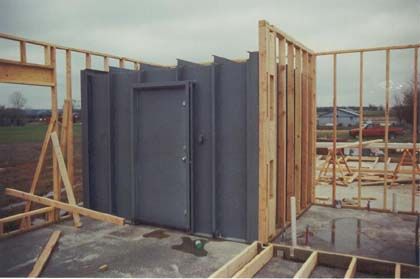