Awning replacement windows, as shown on the right of Figure 5, is a casement window that has been turned on its side with the hinges at the top.

The advantage to this design is that the window can remain open during periods of light rainfall.

An awning window also opens to the outside of the home, forcing the screen placement to be on the inside of the window. 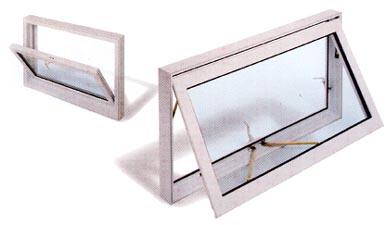 Hopper replacement windows usually open to the inside of the home.

Fixed or picture replacement windows are not meant to be opened. They are usually part of a larger window arrangement that includes windows that open on the side or bottom of the fixed window. Any window that does not open is considered a fixed or picture window, as shown in Figure 6.

A large (undefined), fixed window in a room is called a picture window, as it frames the view of whatever is outside the window.

Bow replacement windows, as shown in Figure 7 and 8, are a picture windows that are built to extend out. It is generally made up of a set of windows angled at both the left and right side. The side windows may or may not open. The use of a bow window allows light to enter from 3 directions as well as making the room that it is mounted in appear substantially larger. 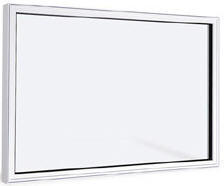 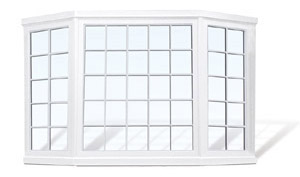 Both bay and bow replacement windows provide a bench/shelf which can be used for seating, flowers and plants. 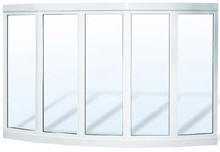 Garden replacement windows, as shown in Figure 10, are, as the name implies, designed for cultivating plants. It protrudes from the home and allows sunlight to enter from the front, sides and top. Some replacement garden windows have side windows that open, others do not. They are popular in a kitchen environment for growing herbs. 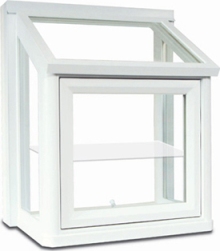 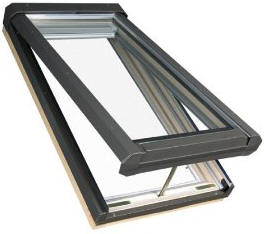 A skylight, Figure 11 is a window that is mounted in a roof. There are hundreds of different styles, and shapes. Depending on the manufacturer and model they can be mounted in flat or sloped roofs and can be of a style that open or are fixed.