This is the most common window in older homes.

Because of the way the window is designed there must be some clearance, even if it is small, to allow the window to slide in the vertical channels. This necessary clearance, makes this window one of the worst, when it comes to air ingress. 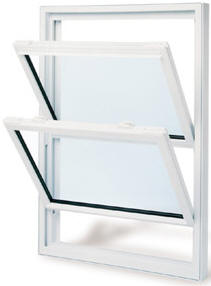 Double hung replacement windows, as shown in Figure 2, are very similar to the hung window with the exception that the upper window in the frame has the ability to move down. This allows for the escape of hot air through the upper window, while cool air enters the room through the raised lower window. Because the top window must have clearance to slide in the window frame channels as well as the lower window, air ingress is worse than a hung window.

Slider replacement windows, as shown in Figure 3, move horizontally within a frame. In some cases, both windows will slide in opposite directions. These windows have become very common for low end housing, as they are inexpensive to manufacturer. However, because clearance is required between the window and the frame in order for the window to be able to slide there is always some air ingress. 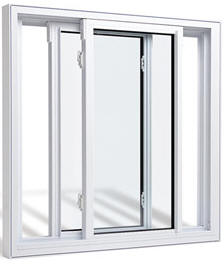 It should be noted that casement windows open to the outside, not the inside of the home.

Some casement windows use a pivot instead of a hinge and the window opens from a point approximately 25 % of the width of the window. Because of the mechanical cranking mechanism, the window can be closed very tightly against the elements. A well designed, casement window is the best defense against air ingress if you require a window that opens.

One negative for casement windows is that screens must be placed on the inside of the window frame.