Repeat the procedure at all corners. Follow this step by marking the height of the footing on one of the outside stakes, that is 8 inches, and securing one end of the line to that level, as shown in Figure 5. 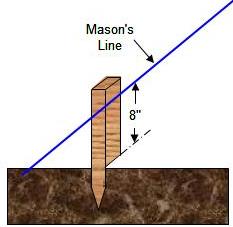 Repeat this at a second stake (stake B) and stretch the line tightly between them, making sure to check for level with a line level, as shown in Figure 6.

Continue this process until all stakes are joined, delineating the perimeter of the footings as shown in Figure 7. Intermediate stakes are then driven a fraction of an inch away from the stretched line as shown in Figure 8. These stakes should be spaced no more than 2 1/2 to 3 feet apart. (Concrete is heavy. It is better to have an over supported form than one that collapses during the pour). When all stakes are driven, the mason’s line can be removed. 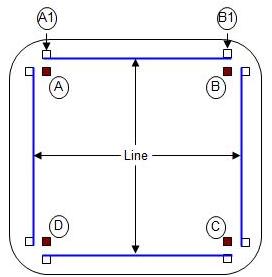 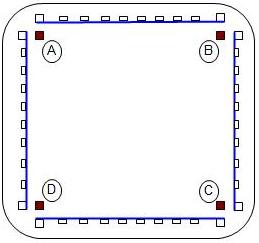 It is time to nail the form boards to the stakes. (Make sure that the top of the board is in line with the previously marked height.) Nail one form board to the inside of the end stake and fasten the other end to an intermediate stake. Check the top of the form board for levelness with a carpenter’s level. Butt a second board against the first and repeat the same procedure. All the remaining boards are attached in this fashion until the outside perimeter is completed, as shown in Figure 9.

Again check for level. Once all the boards are nailed, cut the stake tops flush with the top of the forms. This is done to facilitate the leveling of the top of the footings after the concrete is poured, as shown in Figure 10. 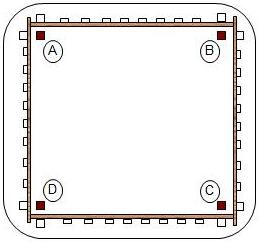 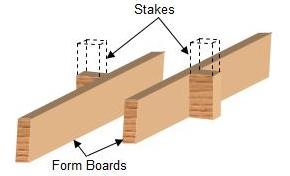 Your floor-framing plan will most likely require intermediate girders to carry a portion of the house loads.

These girders sit on piers, which in turn sit on footing pads. These interior footing pads are now located using the corner building stakes. As an example consider a house that requires tow piers, which are to be constructed of double rows of concrete blocks, measuring 16 inches square. The center line of pier A is located 12 feet from the outside of one foundation wall (not the footing that we just measured!) and 12 feet from the other, as shown in Figure 11.