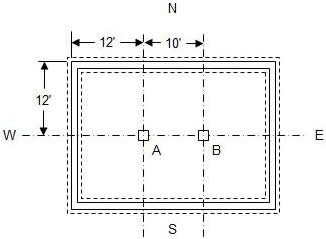 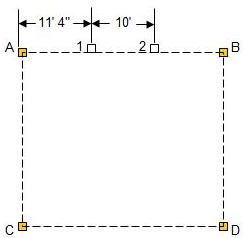 A stake is driven at each of these points and the procedure repeated along the south wall (line CD). The opposing stakes are connected with a mason’s line, thus locating one edge of each pier, as shown in Figure 13.

In order to find the corners, we measure the perpendicular distance, that is , 11' 4″, along both side walls (lines AC and BD). Stakes 5 and 6 are driven and connected with a line. The intersection of both sets of lines establishes the pier corners. Drive a stake at each intersection, as shown in Figure 14. 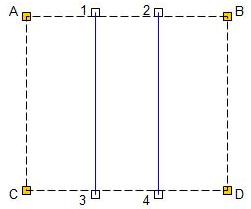 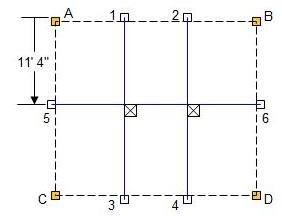 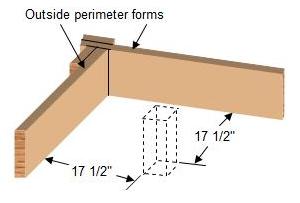 The footing pads project 8 inches on all sides. To locate the footing corner, follow the procedure outlined earlier for continuous footings. You need only to find one corner since pier footings are square. These forms can be ready ahead of time and dropped into place. If you are digging trenches instead of building forms, you need to locate all four footing pad corners and excavate to the required depth.

Building The Footing Forms – Inside Perimeter:

Now that the piers have been located and marked, the next step is to build the inside perimeter forms. To find the exact location of the inside footing form, measure the width of the footing, that is 16 inches, and add to this dimension the thickness of the form material, 1 1/2 inches. Measure in from the outside perimeter forms 17 1/2 inches and drive a stake where the side and the end measurements intersect, as shown in Figure 15.

The steps that follow are similar to those described earlier for exterior perimeter formwork. Measure and mark the footing height at an end stake, stretch a line between tow corner stakes, locate intermediate stakes, and nail the boards. Using a carpenter’s level, make sure that the inner and outer perimeter forms are level with one another, as shown in Figure 16. The final product should look like a rectangular doughnut, as shown in Figure 17. 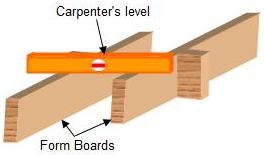 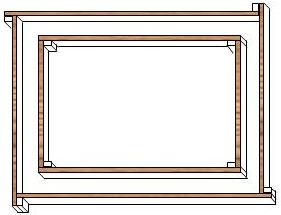 There are three remaining tasks before pouring the concrete: