A kitchen pass through, as shown in Figure 1, provides ease of moving meals from the cooking area to the eating area. In smaller homes it has the effect of making both the kitchen, cooking area and the dining area appear to be larger, reducing the claustrophobia that may be prevalent. 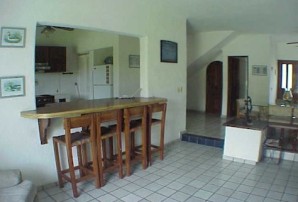 If you are contemplating building a kitchen pass through there are some initial investigations that must take place. 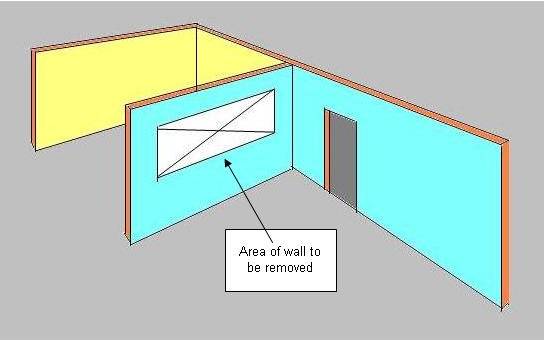 Using painter's masking tape (painters masking tape will not damage the paint when removed), outline the proposed area of the wall to be the kitchen pass-through, as shown in Figure 2.

Once the area of the pass-through is identified perform the following investigations:

Note: The use of masking tape rather than a pencil line at this point allows you to change your mind or move the pass through, without creating any damage, should installation problems be discovered.

Once you have decided to proceed follow this procedure for a nonbearing or non supporting wall. If you have a non-bearing wall you can easily install pocket doors in your pass through in order to close off the kitchen area, if you so desire.

Pocket doors can be advantageous if you have guests over and they can see through the pass through and into your kitchen where you might have a bit of an untidy situation, to say the least!

To build in pocket doors into your kitchen pass through follow the procedure identified in the section on pocket doors. The pocket door information provided shows the doors being entrance doors, however, there is no difference other than the height of the framing.

Installing pocket doors will require that the wall be opened up 50% more on both sides of the planned opening, as shown in Figure 3.

As well, you will have to cut out an additional 2 inches higher. It also means that there can be no obstructions in the wall, in the door areas, as well as the opening. 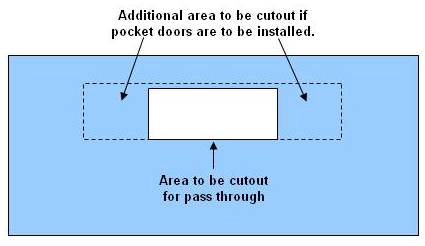 You can also install sliding doors on the outside of one of the sides of the opening if space allows.