If you are undertaking a home improvement that involves electricity it is important for you to completely understand electrical switches and outlets (receptacles).

The most common and least expensive switch, is the toggle on/off switch, as shown in Figure 1.

In some cases it is desirable to have a switch in 2 separate locations, both of which can turn the same circuit on or off. This type of switch is called a 3-way switch, as shown in Figure 2 (this may sound confusing, because a 3-way switch can only be used in 2 locations, however if you consider that the basic switch has 2 positions, on and off, then the nomenclature of "3-way" has some sensibility.

There are also other cases where it is desirable to have switches turn off the same circuit from more than 2 locations. In this case a 4-way switch, as shown in Figure 3, is utilized. There is no limit to the number of 4-way switches that can be incorporated into a circuit.

The basic toggle switch is most commonly available in white, almond and ivory (bone). However, there are many specialty colors including brown, red, black, blue, and green. The color of a switch does not signify any electrical characteristics.

The same functions as the toggle switch, "On/Off", "3-way" and "4-way", can also be obtained in what is currently called a "decorator" version, as shown in Figure 4. These switches are relatively much more expensive then the basic toggle switch, but to most homeowners provide a more appealing appearance. Decorator switches are also available in a variety of colors the most popular being white, almond and ivory (bone).

Covers for switches come in a variety of configurations (number of devices covered) and in the same colors as the devices themselves. They also come in different materials, plastic, nylon, ceramic, steel, wood and brass. The cover plate is strictly decorative and provides no electrical value. It does however provide safety as it maintains any fire hazard to within the electrical box, that the switch is mounted to.

Note: Switches should never be installed or used without a cover plate!

All electrical devices must be mounted in appropriate electrical boxes to ensure safe operation. A recent addition to switches is a ground screw, as shown in Figure 5. 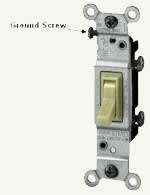 Previously it was considered that having the switch mounted to an electrical box that was grounded was sufficient protection from electrical shorts. Now that the vast majority of residential electrical boxes are made of plastic, it was deemed that the mechanical connection of switch frame to electrical box via a mounting screw was not sufficient to ensure good grounding. The ground screw is painted green.

Electrical outlets (receptacles) in walls and floors may present shock and electrical fire hazards to consumers. The U.S. Consumer Product Safety Commission estimates that 3,900 injuries associated with electrical outlets (receptacles) are treated in hospital emergency rooms each year. Approximately a third of these injuries occur when young children insert metal objects, such as hair pins and keys, into the outlet, resulting in electric shock or burn injuries to the hand or finger. CPSC also estimates that electric outlets are involved in 5,300 fires annually which claim 40 lives and injured 110 consumers.

Older homes may have outlets (receptacles which are damaged or which, otherwise, may have deteriorated over the years. In one case of a damaged outlet, a woman suffered severe burns to her hand as she was plugging in a floor lamp. Part of the plastic faceplate of the outlet had broken away, allowing the prongs of the plug to bridge from the electrical contacts to the grounded strap, resulting in intense electrical arcing.

Outlets (receptacles) also deteriorate from repeated use, from plugging-in and unplugging appliances as is often done in kitchens and bathrooms. As a result, when plugs fit loosely into electrical outlets (receptacles), especially the two-prong ungrounded type, they may slip partially or completely out of the electrical outlet (receptacle) with only slight movement of the attached cord. Outlets in this condition may overheat and pose a serious fire hazard; if covered by a curtain or drape, the fire hazard is even greater.

If a homeowner is not comfortable working with electrical devices, they should have a qualified person replace deteriorated and damaged outlets (receptacles) and, at the same time, upgrade their home electrical system to present safety standards. The simplest and most effective method to protect against electrocution is through the installation of ground- fault circuit interrupters (GFCIs) (Figure 6).

Another method of protection in the home is to install 3-wire outlets which will accept either 2- or 3-prong plugs (Figure 7). This method, however, requires a grounding conductor which may or may not be available in the outlet box.

The least acceptable method is installing another 2-wire outlet (receptacle), as shown in Figure 8, that requires the use of an adapter for accepting 3-wire plugs, as shown in Figure 9. Even thought the tab on the adapter may be properly connected to the cover-plate screw, the grounding path may not be adequate to protect against ground faults.

Outlets (receptacles) should never be installed or used without a cover plate!