Clean, screened fill without any debris or organic matter is important to avoid having the ground underneath the slab settle. The fill should be tamped into position with a vibrating tamper and and the finished fill should be 8″ from the top of the forms.

If there is a requirement for drain and vent piping and electrical conduit, it should be installed at this time. Make sure all conduit, and piping is immediately capped to prevent, any debris, concrete, or gravel from entering the pipes.

Good building practices suggest that all pipes and conduits be laid in a bed of sand and covered with sand to avoid having the gravel or crushed stone base course, damage the material.

The base course consists of either crushed stone or gravel and should be a minimum of 4 inches thick. The base course helps to prevent moisture from forming water pools below the slab.

A vapor barrier, polyethylene sheet a minimum of 0.006″ thick should be placed on top of the base course to prevent moisture from permeating the slab from the soil. If necessary holes are cut in the polyethylene sheet to allow for plumbing pipes and electrical conduit.

The most common slab reinforcement is 6″ X 6″, 10 gauge wire mesh, that is pulled up to the lower third of the slab after it has been poured or is propped up using rocks, or fittings prior to the pour.

A relatively new method of reinforcement is to have fiberglass strands mixed into the concrete by the concrete supplier.

The footings should be reinforced with 3 or 4 metal rods known as rebar. Rebar comes in various sizes and grades. The most common rebar for house foundation construction is 5/8″ (#5), grade 40. The method of installing the rebar, so that it does its job of reinforcing the concrete so that it doesn't crack requires some basic knowledge.

Rebar is usually sold in 20' lengths, and is cut using a power saw with a metal cut-off blade. Many building supply vendors will cut and/or bend the rebar to length and angle prior to delivery.

These are the key points when using rebar:

Figure 12 - Using rebar in a corner

Once the forms are in place, the plumbing and electrical is roughed-in, the base course and vapor barrier has been installed and the footings and slab have been reinforced you can start to pour the concrete. The size of the project will most likely determine whether you should have pre-mixed concrete delivered or make it on site.

Correctly pouring the concrete is critical to a project that will last with little or no problems. The concrete must be worked into the corners of the forms and around the metal mesh in the slab and rebar in the footings. Although concrete is heavy and will seek out its own level, it definitely will leave voids and honeycombs if it is not tamped into position and vibrated. it is also wise to use a hammer to tap on the exposed sides of the forms all around the perimeter of the forms.

After the concrete is level with the forms the next step is to create a smooth surface. 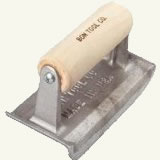 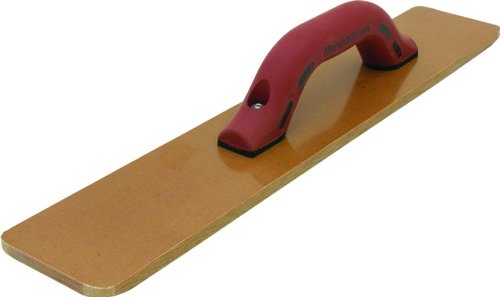 Once the concrete has been troweled it needs to cure. During the curing process it is important to keep the slab moist at all times.