The word "flat" in the case of a roof is often a misnomer. Roofs, even the ones that are used for decks, are, in most cases, not designed or constructed perfectly flat. A small pitch is usually an integral part of the flat roof design to facilitate the removal of water from the roof. Without any pitch, water and ice tend to build up on the roof. If the roofing membrane is undamaged, the puddling will cause no harm. But if there is even the tiniest of cracks in that membrane, there is a great chance of leakage.

The various framing patterns are shown in Figures 18. 19 and 20.

The joisted flat roof is structured like a floor. Building codes must be checked for the design loads on the roof.

Because the roof is flat, and must support snow loads, the ceiling, the built-up roofing, and whatever mechanical pipes and ducts are hung from it, the loads are not as small as those used for pitched roofs. The depth of the joists will be dependent on the design loads and on the spans. Please see the following joist charts:

Illustration 21 shows the correct method for framing a corner and overhangs in flat roof construction. 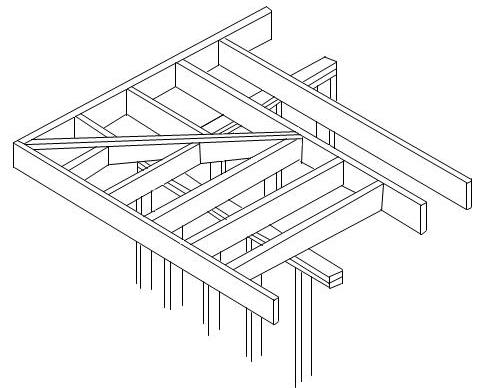