The insulation that surrounds the conductor should not go under the screw terminal, as shown in Figure 13. 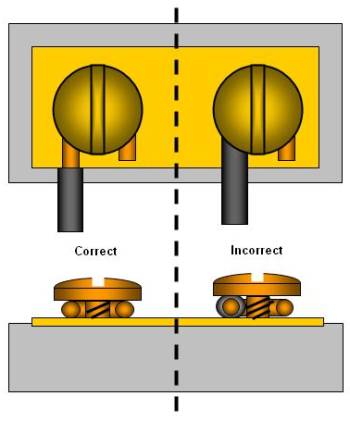 If it is necessary to have more than one wire on a screw terminal, the connection should be made by using a wire nut to connect the two wires together with another wire that connects to the screw terminal as shown in Figure 14.

The proper use of wire nuts is very important. Many homeowners and electricians have spent days and weeks trying to isolate a bad connection that causes lights to flicker or electrical outlets to work - sometimes.

In many instances the problem is is caused by poor mechanical wire connections. Although a wire nut does make a mechanical and electrical connection, it should be considered nothing more than a method of insulating the connection of a number of wires.

It is also important to use the correct sized wire nut for the number and gauges of wires that you are connecting together.

Figure 15 shows a well made mechanical joint where the wires have been twisted together. Twisting the wires together helps to prevent wires from disconnecting over periods of time due to vibrations within a home.

Bare wire should not protrude below the bottom rim of the wire nut, as shown in Figure 16. Allowing bare wire below the wire nut, could lead to shorting problems. In many cases this is caused by using a wire nut that is to small for the number and gauge of wires being joined.

Figure 17 shows the correct use of a wire nut to join a group of wires together. This is a good mechanical as well as electrical joint that should last for decades.

It is important to note that the wire nut must be twisted onto the wires until it is very tight. The use of a pair of pliers to aid in the process is normal.

Installing or replacing a receptacle (outlet)