Question: I have cracks in my ceiling. I repair them using a joint compound and a few months later they reappear. How can I eliminate them?

Answer: It is difficult to stop the reappearance of ceiling cracks because in most cases they are caused by the shifting and settling of the home. You did not say whether this was a plaster or drywall ceiling.

You can try to use a fiberglass tape, as shown in Figure 1, over the crack and then feather out the drywall compound a good 8 inches on either side of the tape. 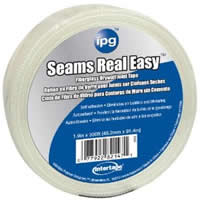 Another method would be to hang another layer (or if this is plaster a layer) of 1/4 inch drywall in the opposite direction to the current drywall that is on the ceiling. This will make the ceiling stronger and may prevent the cracks from appearing.

At a minimum you want to have screws every 6 inches on center on the ends of a 4 foot sheet of drywall and 12 inches in the center of the sheet. I would also put some construction adhesive on both sides of any ceiling cracks before I raised the drywall into position.

If the drywall is cracking at the joint between the ceiling drywall and the wall drywall you may have a relatively common problem known as roof truss uplift.